Q. Injured on a Delaware highway, my old client spent the night in a Dover hospital, returned to Maryland for more treatment, and called me for representation. I'm not licensed in Delaware. May I take her case? 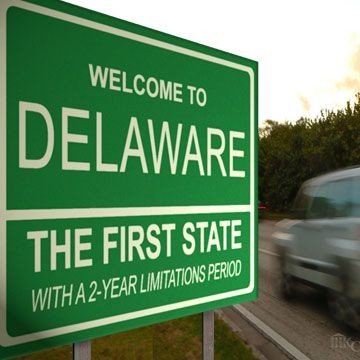 A. If you take a case across the border, make sure you don't cross the line into the unauthorized practice of law.

The problem is that disciplinary boards and courts do not always agree on where to draw this line. Under Rule 5.5(a) of the Rules of Professional Conduct, "An attorney shall not practice law in a jurisdiction in violation of the regulation of the legal profession in that jurisdiction, or assist another in doing so." So before you take a case arising elsewhere, you must check that state's regulations to determine whether and to what extent you may participate.

Fortunately, as long as you don't lie about where you're licensed, most states will let you handle certain cases that cross jurisdictional lines. See Rule 5.5(b). Since your client is a Maryland resident who is receiving substantial treatment in Maryland, your work in compiling medical records, preparing a settlement demand and negotiating a resolution of the claim probably won't draw objections that you are practicing law without a license.

But proceed with extreme caution. While it bucks the trend toward more regional practices, you can still find occasional opinions that regard pre-suit settlement negotiations as the unauthorized practice of law.

To avoid problems with claims arising out-of-state, you should:

➤ Inform Your Client of the Limitations of Your License - your retainer agreement must list the states in which you are licensed, emphasize that you are not licensed where the accident arose, and explain your need to affiliate with local counsel before litigating the matter. In addition to getting your client's consent to retaining additional counsel, you should outline the manner in which the extra lawyer will be compensated;
➤ Engage Local Counsel at an Early Stage in the Process - this will not only deter accusations that you are practicing without a license, but it may be critical in understanding the substantive law of the other state so that you can prepare your case in a competent manner;
➤ Review the State's Rules on Pro Hac Vice Admission - most states let lawyers handle specific cases if they reasonably expect to be specially admitted for later litigation;
➤ Make Sure You're Competent in the Area - the rules are chiefly concerned with competence. So they grant greater latitude for cases which would be within the customary scope of your practice. Rule 5.5(b)(4). This should permit an accident lawyer to prepare a case for settlement prior to litigation, especially for a client whose treatment was largely rendered in-state.

Ironically, your experience in handling these cases may work against you on the other side of the border. Accustomed to a statute of limitations giving them three years to sue, many Maryland lawyers learn about Delaware's two-year deadline when it's already too late. Without a firm grasp of the other state's law, your assumptions about claims, defenses, damages, procedural requirements and other key issues may be fatally flawed.

The same is true of settlement negotiations. Settlement values may differ in different states and, even in the same state, some locales are more generous than others. So while you may be able to negotiate a settlement "on your own," affiliating with local counsel may prevent you from selling yourself and your client short.

Naturally, you cannot file suit, sign pleadings or appear in a court where you are not admitted to practice. If you do so without following the forum state's rule on pro hac vice admission, your trip across the border will cross ethical lines as well.

Practice Management
Attorney Grievance defense attorney specializes in defending lawyers in disciplinary proceedings before the Maryland Attorney Grievance Commission and the D.C. Bar's Board on Professional Responsibility involving professional misconduct, legal ethics, disbarment, suspensions of law licenses, petitions for disciplinary action, reprimands and sanctions for unethical conduct. If you receive a letter from Bar Counsel Lydia Lawless, Disciplinary Counsel Hamilton Fox, or from any attorney disciplinary board in Maryland or the District of Columbia, retain experienced attorneys with expertise in lawyer discipline and breach of ethics cases to avoid sanctions for professional misconduct. We help lawyers avoid disbarment, suspension, reprimands, censure and informal admonitions by drafting responses to client grievances and ethical complaints; representing lawyers in peer reviews, evidentiary hearings, and oral arguments before the BPR and the Court of Appeals; filing petitions to reinstate an attorney's license to practice law; conducting law firm ethical compliance audits; and drafting legal ethics opinions to protect lawyers from ethics charges. In many cases, disciplinary proceedings may be dismissed, dismissed with a warning, or result in a conditional diversion agreement with Bar Counsel to rectify misconduct. Lawyers may need help in managing their law firm attorney escrow IOLTA trust account and complying with attorney trust accounting rules to avoid charges of ethical misconduct. Do not represent yourself in responding to an attorney grievance, law firm client complaint, or other allegation of ethical impropriety. Attorney grievance defense counsel may help you comply with legal ethics rules, avoid sanctions like suspension or disbarment, and avoid future attorney grievances.