As one law professor wrote, this oral "argument delve[d] into the philosophy of attorney regulation and the appropriate role of disciplinary counsel in a way that few cases do." 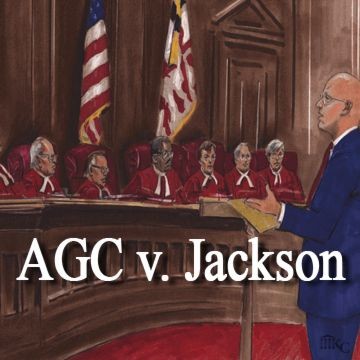 Issue: Should the Court sanction a member of the D.C. Bar who followed Bar Counsel's guidance in maintaining a law office located in Maryland?

Holding: No. Having followed Bar Counsel's own recommendations on how a D.C. lawyer may maintain an office located in Maryland, the Court did not believe that sanctions were warranted even though current rules prohibit a continuous and systematic presence. Because the lawyer reasonably believed that she could keep her Maryland office, the Court unanimously dismissed all charges against her.

Visiting her office on an unrelated matter in 2015, Bar Counsel's senior assistant knew this lawyer wasn't licensed to practice in Maryland. Rather than prosecute her for opening a Maryland office, the assistant advised her on how to maintain it. She followed this advice. But three years later, Bar Counsel tried to have her disbarred for staying there.

Outraged by the prosecution of an attorney who relied on Bar Counsel's recommendations, Irwin Kramer urged the Court to dismiss all charges. As Georgetown Legal Ethics Professor Michael Frisch wrote, "the argument delve[d] into the philosophy of attorney regulation and the appropriate role of disciplinary counsel in a way that few cases do." Like the Court, he "was hard pressed to understand the wisdom of this prosecution."

Tweet
Tags:
oral argument
Giving Thanks
The Ethics of Intimidation

A Long Wait to Reinstate

Avoiding A Disruption To Practice

Oral Arguments
Attorney Grievance defense attorney specializes in defending lawyers in disciplinary proceedings before the Maryland Attorney Grievance Commission and the D.C. Bar's Board on Professional Responsibility involving professional misconduct, legal ethics, disbarment, suspensions of law licenses, petitions for disciplinary action, reprimands and sanctions for unethical conduct. If you receive a letter from Bar Counsel Lydia Lawless, Disciplinary Counsel Hamilton Fox, or from any attorney disciplinary board in Maryland or the District of Columbia, retain experienced attorneys with expertise in lawyer discipline and breach of ethics cases to avoid sanctions for professional misconduct. We help lawyers avoid disbarment, suspension, reprimands, censure and informal admonitions by drafting responses to client grievances and ethical complaints; representing lawyers in peer reviews, evidentiary hearings, and oral arguments before the BPR and the Court of Appeals; filing petitions to reinstate an attorney's license to practice law; conducting law firm ethical compliance audits; and drafting legal ethics opinions to protect lawyers from ethics charges. In many cases, disciplinary proceedings may be dismissed, dismissed with a warning, or result in a conditional diversion agreement with Bar Counsel to rectify misconduct. Lawyers may need help in managing their law firm attorney escrow IOLTA trust account and complying with attorney trust accounting rules to avoid charges of ethical misconduct. Do not represent yourself in responding to an attorney grievance, law firm client complaint, or other allegation of ethical impropriety. Attorney grievance defense counsel may help you comply with legal ethics rules, avoid sanctions like suspension or disbarment, and avoid future attorney grievances.