A Long Wait to Reinstate

Oral Arguments
Irwin R. Kramer
The Court only suspended him for 60 days. But rather than support a timely reinstatement, Bar Counsel strongly opposed his return to practice after 878 days. 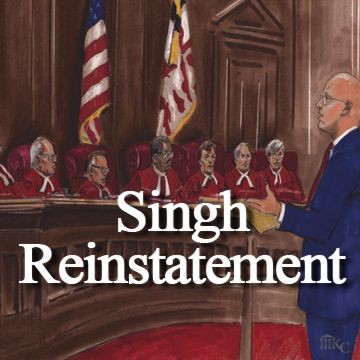 Issue: Sidelined for over two years on what was supposed to be a two-month suspension, should an attorney who exercised good faith in complying with Bar Counsel be reinstated?

Discussion: On Jul 17, 2019, the Court of Appeals imposed a 60-day suspension upon an attorney who represented a married couple in obtaining permanent residency for one of the spouses, but later advised one spouse on bringing criminal charges against the other, failed to advise him of his options in removing conditions on his permanent resident status within sufficient time to do so, settled a fee dispute in return for a release without advising his client to seek independent counsel, and testified under oath that he usually complied with IOLTA rules when, in fact, he did not.

While settlement of a fee dispute was also improper and he did give misleading testimony under oath, the Court rejected Bar Counsel's call for an indefinite suspension of a lawyer who did not harm his clients, misappropriate any funds or have any history of discipline. Writing for a four-judge majority, Judge Robert McDonald believed that the Court could protect the public "without sidelining for an indefinite period an attorney who has no other record of discipline and who serves a vulnerable class of clients of moderate means." Bar Counsel nonetheless opposed his reinstatement after sidelining him for 878 days.

Avoiding A Disruption To Practice

Oral Arguments
Attorney Grievance defense attorney specializes in defending lawyers in disciplinary proceedings before the Maryland Attorney Grievance Commission and the D.C. Bar's Board on Professional Responsibility involving professional misconduct, legal ethics, disbarment, suspensions of law licenses, petitions for disciplinary action, reprimands and sanctions for unethical conduct. If you receive a letter from Bar Counsel Lydia Lawless, Disciplinary Counsel Hamilton Fox, or from any attorney disciplinary board in Maryland or the District of Columbia, retain experienced attorneys with expertise in lawyer discipline and breach of ethics cases to avoid sanctions for professional misconduct. We help lawyers avoid disbarment, suspension, reprimands, censure and informal admonitions by drafting responses to client grievances and ethical complaints; representing lawyers in peer reviews, evidentiary hearings, and oral arguments before the BPR and the Court of Appeals; filing petitions to reinstate an attorney's license to practice law; conducting law firm ethical compliance audits; and drafting legal ethics opinions to protect lawyers from ethics charges. In many cases, disciplinary proceedings may be dismissed, dismissed with a warning, or result in a conditional diversion agreement with Bar Counsel to rectify misconduct. Lawyers may need help in managing their law firm attorney escrow IOLTA trust account and complying with attorney trust accounting rules to avoid charges of ethical misconduct. Do not represent yourself in responding to an attorney grievance, law firm client complaint, or other allegation of ethical impropriety. Attorney grievance defense counsel may help you comply with legal ethics rules, avoid sanctions like suspension or disbarment, and avoid future attorney grievances.